The Church is bigger than America 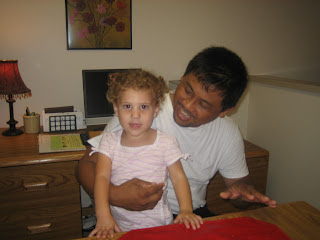 The picture above is of our 2 year old daughter, Lia, and our friend David Dasig from the Philippines. He is one of the 10 International Beeson Pastors who are with us here at Asbury Theological Seminary for the next six weeks. David and the other international Christian leaders from all over the world leave their country, family and ministry 6 weeks each year for four years to pursue refinement of heart and mind through the doctor of ministry program. We have adopted David into the Luchetti family while he is here. David is President of the Shekinah Alliance Bible College and he teaches Bible, Theology and Ministry courses at the college for pastors in training. He has a wife and two teenage kids. As we talk about the joys and challenges of life and ministry I've discovered that David and I have more similarities than differences. It is a joy to be a part of the global "body of Christ."

One of the things I have learned during my time in the Beeson Program is that the Church is bigger than America. Of course, I knew this already but I'm seeing it in a different way. While the Church in the global north (America, Canada and Europe) is in decline, the Church in the global south (Asia, Africa and Latin America) is growing rapidly. There was a time when American and European missionaries went to foreign and often third world countries to bring the Gospel, but now many of those same countries are sending Christian missionaries to us. The health of the American Church, in the opinion of many including my own, is dependent on our willingness to not only serve but to be served by what the global church has to offer us. In other words, we have lots we can learn about Christian theology and practice from brothers and sisters throughout the world.
Perhaps the greatest lesson we can learn from our Christian family overseas concerns commitment, or "the cost of discipleship." Many Christians in third world countries are threatened with torture, exile and death because of their commitment to Christ. Many pastors serve their churches faithfully for hardly any compensation at all. As I think about American Christianity in general "commitment" is not the word that comes immediately to mind. Some other "C" words surface like "convenience," "comfort," and "consumerism," to name a few. In other countries, commitment to Christ necessarily entails a counter-cultural life. In America, the church is often guilty of leading people to believe that they can have Christ and the "C" words mentioned above without the cost of having to live a counter-cultural, Christ-like life. It's easier to make God into our image than to accept and embrace that He made us to live into His image, according to Genesis.
Forgive me for my tirade, I'm just thinking out loud. And I realize that, since I have been a pastor for the past 12 years, I too am indicted by my comments above. Like many Christians in America, there have been too many times when I too have sought to squeeze Christ conveniently into my preferential box instead of allowing Him to shape and refine me to live into His realm, the realm of the Kingdom of God. Many in our global Christian family realize this immediately since for them to commit to Christ they must be willing to die.
Dietrich Bohoeffer: "When Christ calls a man, he bids him come and die."
Posted by Lenny Luchetti at 2:12 PM

AMEN!!!! There's nothing else to say!

Thanks for the post. Hey, I was thinking back to an illustration you gave (several years back now) about the necessity of Christian's coming together on a regular basis for corporate worship. It had something to do with clouds - I think? I have a man that I'm discipling that considers himself a Christian and yet he doesn't see the necessity of coming to church.