Final Sunday At SWC Before Sabbatical

This morning I preached my final message as Senior Pastor of Stroudsburg Wesleyan Church before leaving for my one year study sabbatical to pursue a Doctor of Ministry Degree through Asbury Seminary's Beeson Pastor Program. Although it was an emotionally draining day saying goodbye, it's a relief to know that I have the honor and privilege of coming back to continue to serve this church that has literally become a family to me, Amy and the kids. The church provided a fabulous meal to say farewell to us until next May and to welcome Pastor Jason Argo, who is beginning his service as Family Life Pastor, and his wife Nicole. I am confident that the church is in the best of hands with Pastor Jason and Pastor Tim Gilbertsen, our Assistant Pastor. Below are pictures of our church family from both the 9:00 and 10:45 services this morning, as well as a Luchetti family photo taken today. 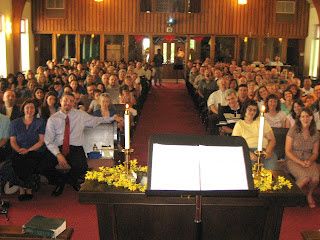 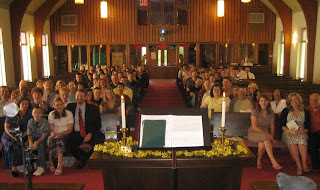 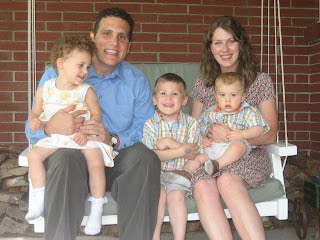 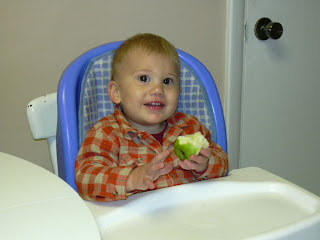 The picture above is of our son, Zachary, when he was nearly one year old. He is now nearly four. When Zach was 20 weeks in utero, we were told that he had choroid plexus cysts on his brain. The doctor told us at week 20 of the pregnancy that the cysts could be a sign of Down's Syndrome or some other brain abnormality. Well, while our little boy would have been beautiful, Down's Syndrome or not, we were extremely grateful he was born without any apparent abnormality.

About one year into his life, however, Zach was not saying as many words as our pediatrician told us he should have been saying. We were somewhat anxious that perhaps those cysts in his brain had come back to haunt us. He was saying the basic words like mom, dad, cat, dog, car and ball, but that was pretty much it. We were concerned, to say the least.

Then one day, out of no where, Zach piped up and said the word, "Jesus." I did a double take because I couldn't believe my ears. Zach said it again, "Jesus" and he kept repeating it sort of like a charismatic preacher, "Jesus Jesus Jesus." Me and Amy were laughing and crying all at the same time. It was a spectacular moment we will never forget. It seemed that after Zach learned to say the word, "Jesus," his vocabulary began to flow quickly and impressively. Once he got "Jesus," his entire vocabulary began to flow and come together.

This is really the story of our lives. Once we get "Jesus," everything else in life seems to flow. Jesus put it this way, "seek first God's kingdom and righteousness and everything else will be added to you as well." I'm learning that when I get "Jesus" in the right place, the central place, that I'm better in every other realtionship and responsibuility of my life. The adverse is also true. When Jesus is not finding the most prominent place on the plate of life's priorities, all other "words" stop flowing.